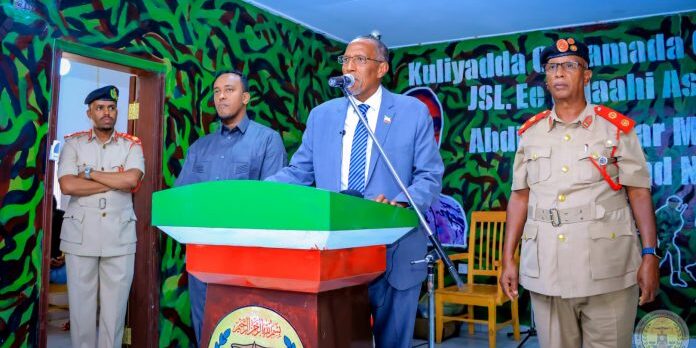 Congratulating the 410 officers who got promoted to second lieutenants at Abdullahi Askar Officers’ Training College of Dararweine, the President of the Republic of Somaliland H.E. Muse Bihi Abdi first underlined the contribution the graduates would make to both the internal and external security of the nation.

President stated that the Political Associations and Parties Registration Committee will declare new political association open and, from thereon, will continue its work until it identifies the 3 associations that will be certified as political parties for the next ten years.

“Three elections are slated for the year. The first will be that of the political associations will declare registration of political associations open in June (2022). The three existing parties will have the same rights as the new associations. The associations will run (against each other) in order that 3 political parties to emerge. The presidential election, next, is scheduled for 13 November. How these could be applied is a matter for the state to decide. Following closely is the selection of the Guurti (the upper House of the bicameral parliament) which also entails a lot of work,” President Bihi stated in one breath.

Speaking about the recent Russian-Ukranian war, President Bihi called the leaders of Russia and Ukraine to unconditionally stop fighting as he recalled the horrors of war and the devastation it meted in people’s lives based on the Somaliland experience.

In his address, President Bihi spoke emotionally of his first-hand experience as a witness in the atrocities occurred in Somaliland by the regime of Siyad Barre. “Hargeisa in the 1988 bombardment was 17km from east to west and 13 km from north to south. Imagine 60 batteries of artillery guns of every caliber and make and 30 tanks mounted above it letting go of salvo after salvo on a city of civilians. Russia is not shelling Ukrainian civilian targets as Somalia did then,” he said.